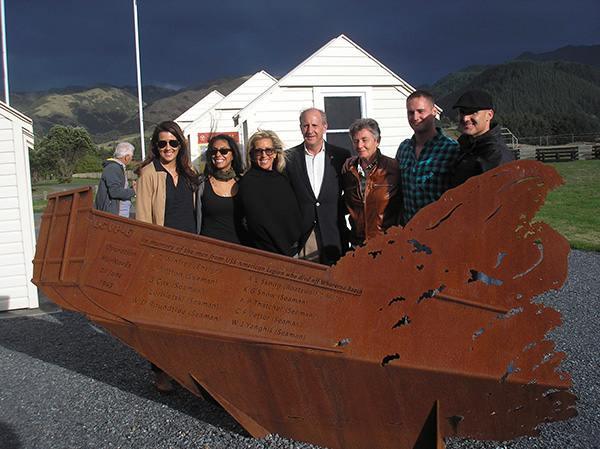 The tour started at the Paekakariki Station Museum where the ambassador and his wife were shown the multi-media display on the Marines presence in the area – funded by the American Embassy.

Trust Chair Jenny Rowan said the Trust was honoured to have Mr Gilbert, his family and embassy staff visiting - and “incredibly grateful for their enthusiasm and support”.

The visit continued with a stop at the Marines Memorial in Queen Elizabeth Park (formerly Camp Russell). Here, local historian Anthony Dreaver recounted the story of the June 1943 landing craft tragedy beside the sailors’ memorial. The entourage continued on to Whareroa Beach where the 10 sailors perished.

The last part of the tour was to Whareroa Farm (the former Camp Mackay) where Roger Childs outlined the In the Footsteps of the Marines event and the group walked up to a lookout to view the remnants of the camp.

The evening concluded with an evening meal at the Raumati home of former Marine, Major Larry Keim, complete with American flag flying and his very own Marines Hut open for viewing!

Successful Ambassadorial Tour
+ Text Size -
Do NOT follow this link or you will be banned from the site! Original generation time 5.6495 seconds. Cache Loaded in: 0.0190 seconds.