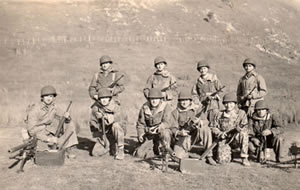 When World War II broke out in 1939, New Zealand gave total support to Britain, sending its army to the Mediterranean. However, by 1942, Singapore had fallen and Japan’s armies threatened the South Pacific. At Churchill’s request, the New Zealand government agreed to leave its army in North Africa. Because New Zealand was an ideal start line for rolling back the Japanese invasion, U.S. Marines were sent here to prepare for the Pacific War, while at the same time protecting the country from the imminent threat of Japanese invasion.

Between 1942 and 1944 over 15,000 American troops were stationed at Camp Russell (now Queen Elizabeth Park), Camp Mackay (now Whareroa Farm) and Camp Paekakariki (now Paekakariki village). The camps went up in a record six weeks, bringing monumental social change to the whole Wellington region and in particular, Paekakariki and its people. Arrangements to supply the troops included vast market gardens and warehouses. 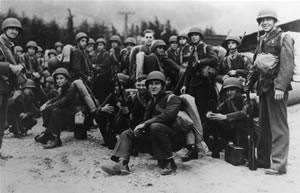 Our town and district gained recreation halls, a hospital, mess buildings, store sheds, transport parks, arsenals and a brig. Men from the Second Marines Division (include others here) in occupied camps. Training to meet the coming conflict was intensive. The forested mountains of Kapiti became practice ground for tropical jungle, its sand dunes resounded to small-arms fire, and its beaches were attacked in practice manoeuvres by landing craft.

These thousands of exotic and generous young men lightened the gloom of wartime. Marines on leave were welcome in the milk bars, homes, bar rooms and dancehalls of New Zealand. The story is told in the first bestseller written by Leon Uris, Battle Cry, much of which is set in and around Paekakariki. Visitors to the camps included Eleanor Roosevelt and Lyndon B Johnson.

In late October 1943 the camps fell silent. A fleet of troopships had departed for the atoll of Tarawa on the equator. There followed a grimly contested amphibious landing that brought death and injury to 3166 young Americans and death to almost all of the 4690 Japanese defenders. New Zealanders shared the pride and the grief of the American families. 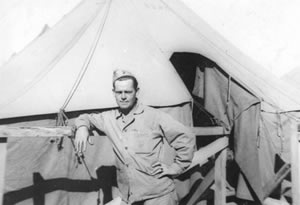 Memorial gates at Queen Elizabeth Park (Camp Russell), various structures at Whareroa Farm (Camp MacKay) and landmarks in northeast Paekakariki (Camp Paekakariki) bear testimony to a dramatic period. Between the highway and railway is the large supply depot that handled Marines material. At the beach we remember a group of 13 young men who died when a landing craft overturned in a night exercise.

The Pacific War and the hosting of American forces changed New Zealand from an isolated country strongly tied to ‘Mother England’ to a confident member of the Pacific Rim countries.

For more information about the American friendly invasion visit the website of NZ History Online.