The US Marines heritage water reservoir on Whareroa Farm has been closed down because it was contaminating the farm water supply.

The Department of Conservation says birds were defecating in the open reservoir and the wooden structure across the top was rotting and falling into the water. While it has now been fenced off and replaced by two new covered tanks – providing the farm water supply, it is still clearly visible to members of the public interested in seeing it.

The reservoir was part of the infrastructure built in the former Camp Mackay to accommodate the US Marines between 1942 and 1944.  The Camp was one of three in Paekakariki, built by Fletcher Construction with Kiwi labour in just six weeks.

Camp Mackay housed 4650 men and was home to the 5th and 2nd Regiments of the 2nd Marines. The camp included 25 concrete tent floors, which would have housed two, four and 8-man tents as other camps did.  It also included a large number of Officers’ billets, an Officers’ Club, 3 recreational buildings, the Divisional Headquarters and accompanying accommodation, a canteen, a bulk store, a brig (jail), ablution blocks, laundries and showers.

Remnants from the camp have all been highlighted in the Marines Heritage Walk installed by the Trust in 2016. 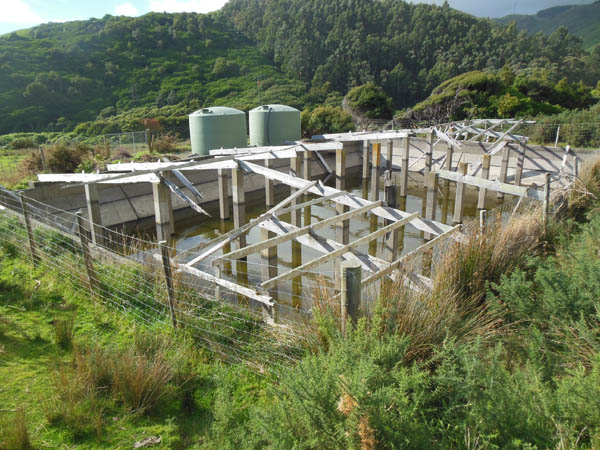 Heritage water reservoir closed
+ Text Size -
Do NOT follow this link or you will be banned from the site! Original generation time 1.9470 seconds. Cache Loaded in: 0.0119 seconds.