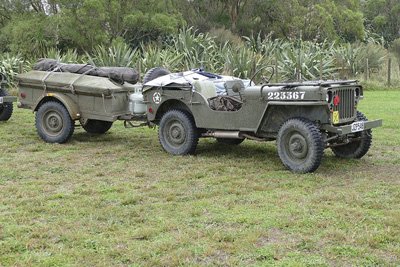 The US Marines Memorial in Queen Elizabeth Park, (Formerly Camp Russell), was an early attraction for the Armistice 100 Convoy when it visited the former Camp Russell on March 22.

Organised by the New Zealand Military Vehicle Club, to commemorate the end of WWI, the Convoy started in Rotorua on March 18 travelling down to Wanaka to see the Warbirds Over Wanaka Air Show on March 31.

The Convoy, included jeeps, Chevy & Dodge Trucks, a Unimog. Over half of the 23 vehicles were brought over from the US by their owners and a number of others joined the group as it headed south.

While at the Memorial, the group paid their respects to US Marines who died or were injured in WWII.  They were welcomed by KUSMT Historian Anthony Dreaver and heard a short address from the Deputy Chief of Mission from the United States Embassy, Susan Niblock.

The group covered over 3500kms in a return trip through some of New Zealand’s most scenic regions – ending in Taumaranui.

Convoy100 visits Memorial Site
+ Text Size -
Do NOT follow this link or you will be banned from the site! Original generation time 2.5617 seconds. Cache Loaded in: 0.0273 seconds.