Until recently, mystery has surrounded the deaths of 10 sailors who died off the coast of Paekakariki during World War II.

Led by HMSNZ Rata a former Anchor Co. coaster and accompanied by Fairmiles 401 and 403 and overhead patrolled aircraft from the Royal NZ Air force, the convoy was steaming to a position between Kapiti Island and the present day Queen Elizabeth Park (Camp Russell). Its men, all members of the 2nd Marine Division, were about to undertake a practice landings with live ammunition. Others had remained behind to act as defenders. 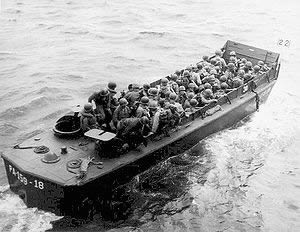 There were three landings, and tragedy struck the third. On Monday June 21, I was walking along the beach with my friend George and came upon a landing barge beached high and dry. It was near where the tyre pole is today.

We were possibility the only New Zealanders so see the barge. Former Paekakariki Fire Chief Colin Gibson, recalls seeing small bulldozers struggling to push barges back into the surf line, the previous day. He thought that local contractor Chum Howell from Paraparaumu was also assisting.

The next day, pupils at Paekakariki School were told there had been drownings and the beach was out of bounds until further notice.

For many years local folklore held that possibly a hundred or more Marines may have perished in the exercise. Now, the fog of war clears a little.

In March 2011, Dave Johnson, a Trustee at the Paekakariki Railway Museum received an email from Kathy Butcher in America.

Kathy wrote that her Grandfather Ensign H. C. Winfrey an Officer of USS 'American Legion' had drowned, along with 12 crew members, when being towed off the Paekakariki beach on June 20 1943. Dave passed the email to the local community paper, Paekakariki Xpressed who corresponded with Kathy.

Kathy Butcher has spent two years researching the death of her Grandfather and is eager to learn if there is any local knowledge of the event.

We learn from Kathy, that the tragedy took place at 2305 and there would have been no local witnesses. Being wartime no press statements were released and no inquiry was held.

Kathy has spoken to some who survived the return trip to the ship and her family are having difficulty understanding how her Grandfather, Ensign H C Winfrey, regarded as an excellent swimmer, drowned. The only conclusion they can come to is that he perished from hypothermia in our frigid coastal waters.

Apparently, Ensign Winfrey had volunteered to go ashore to retrieve the stranded barge and unfortunately he and 9 others perished on what should been a very simple exercise.

*Note: This story was written before the Trust received Frank Zalot's story.