Jack Rogo, a 97 year old survivor of Pearl Harbour, will be a “star” guest at this year’s Memorial Day service at the US Marines Memorial in Queen Elizabeth Park.

Trust Chair Richard Benge says “it’s exciting and fitting” to have Mr Rogo visit because the service always has a strong focus on the remembering the ten US seamen who lost their lives in “the Landing Tragedy” on Paekakariki beach in 1943.

Jack Rogo, enlisted in the United States navy on February 14 1940. After undertaking basic training at the San Diego Naval Training Station he was assigned to the USS Bridge, a floating refrigeration ship bound for Hawaii.

On the morning of the attack on Pearl Harbour, Jack was having breakfast in the mess and “the building convulsed”. He says they didn’t pay attention to it as the rumour was that the armoury was on manoeuvres, but some of the explosions were very loud and they couldn’t understand what was going on.

After breakfast he went to Lanai to see what was happening and couldn’t believe his eyes; ships were sinking and turning over. Men were swimming to shore (if they could) and the dead and badly wounded were floating on the water.  Jack volunteered to go out and pick up the wounded who couldn’t make it back to shore.

Find out more of Jack Rogo’s story by visiting www.marinenz.com after May 28. 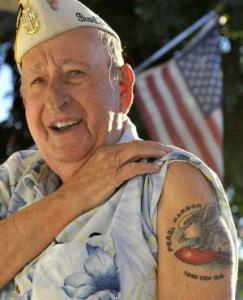