Seventy-one years after the Battle of Tarawa (November 20-23, 1943) the six World War II U.S.Marine veterans, who recently visited Wellington as guests of the Trust, have accomplished their mission to repatriate the bodies of 25 of their ‘brothers’ from the scene of their old battle ground. 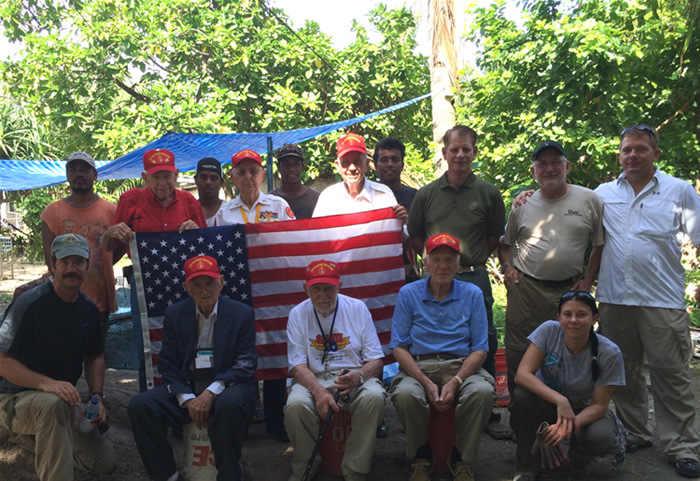 The group: Dean Woodward, Jim Morrow, Wendell Perkins, C.J.Daigle, Dean Ladd and A.J.Bowden (aged 88-93) were all stationed in camps in Kapiti and Porirua Districts and are veterans of the Battle of Tarawa.

The ‘band of brothers’ left New Zealand recently to be part of a ceremony to repatriate their fallen brothers to home soil.

Lead by Mark Noah (49), an Airline Pilot who founded Flight History Inc their mission is now accomplished. Noah (49) has made over 30 trips to Tarawa in the past decade to locate the remains and lost graves of American veterans still ‘missing in action’.

Statistics from the Battle of Tarawa are grim; 35,000 U.S. Troops fought in the battle resulting in 1696 American and 4690 Japanese casualties.

According to a 2013 New York Times report 471 Tarawa Marines are buried by name in American cemeteries, 104 are buried in unknown graves at the National Memorial Cemetery in Hawaii and up to 520 were still on or near Tarawa.

Read the Article 'The search for the lost marines of Tarawa' by Wil S Hylton.

Wil S. Hylton is a New York Times contributing writer. His most recent article was about the artist James Turrell. This article was adapted from “Vanished: The Sixty-Year Search for the Missing Men of World War II,” just published by Riverhead Books.

Mission Accomplished
+ Text Size -
Do NOT follow this link or you will be banned from the site!