Memories of the U.S.Marines in Paekakariki (Part 2)

In those days there was no Baptist church in the village. Mrs Miller, a devout Baptist, lived next door to us and she built a large lounge onto her house opening it up for services on Sundays. My sisters and I went to her little Sunday school.

Some of the Marines came from the southern Baptist bible belt states, they were very Christian and loved coming to her home to worship. From there they visited our home in the evenings. I still have an autograph book with messages from some of them.

From Paekakariki, the Marines were sent to Tarawa. They were still very young men, some just out their teens. Many did not return here and of those who did, many had malaria and worse.

There was a camp hospital at the top of Wellington Road near where the Golf House/Services Club and former Steiner School were housed. The Marines spent time recuperating there; they were very ill, tired and hungry.

They would wander down to the little store on the beach front (formerly McKinlays, now The Beach Store). The store wasn’t very big. It had a dividing wall with a grocery on one side and a dairy selling cone ice-cream and milkshakes, on the other. When the Marines were in the shop there wasn’t much space. We’d squeeze in behind them and wait to be served. They were so hungry they would buy up slabs of Adams Bruce fruit cake and eat it outside the shop. 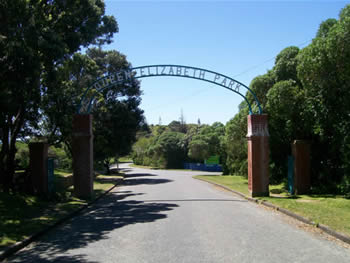 One of the entrances to Paekakariki was just before the Commune Corner. The camp entrance had a sentry box and every vehicle that went into the camp was checked before it crossed the railway line. One day a truck was hit by a train and ended up a crumpled mess beside the track. It was awful. We children were attending the old school and stayed there until the accident was cleared away.

The sentry box remained for a while after the Marines had gone and an enterprising person made it into an ice-cream kiosk (selling Frosty Jack I think). It stayed there and continued to attract motorists who’d stop specially for ice creams. Convoys of covered trucks used to go out of the village across the railway line as well.

The Marines loved children and animals. My three year-old golden retriever Prince loved food and anyone who gave it to him. Sometimes he’d go walkabout to find his friends. We thought he had gone to visit a certain black lady Labrador who lived at a house on the corner. Two days later he still hadn’t t returned.

My mother told me she was in the village shopping as a convoy of trucks rolled out. When they stopped at the crossing she watched in amazement seeing Prince sitting up in the front seat of one of the trucks. She rushed out to the truck and asked the driver for her dog. "No Ma'am" he replied, "he is coming with me. I found him."

Prince wasn’t happy about leaving his extra food source, but we got him back and his freedom was curtailed somewhat after that.

Memories of the U.S.Marines in Paekakariki Part 2

Memories of the U.S.Marines in Paekakariki Part 2
+ Text Size -
Do NOT follow this link or you will be banned from the site! Original generation time 2.6003 seconds. Cache Loaded in: 0.0503 seconds.