1943 June landing practice... before school, I looked out the window and saw a great collection of ships to the north. After school I raced home and saw a deep foxhole with defenders around it. The Marines sent for some food from the beach shop. A barge was stranded on the beach and some personnel had drowned when towing it through the surf at night. After the landing, the rubber boats used were left learning against the sand dunes where the Surf Club is now sited. 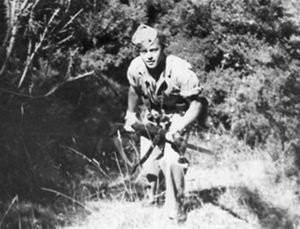 In the Raramaroa Valley, just behind Camp Mackay we arrived one day just as the Marines had finished a tear gas exercise. They had left, and the grenades were lying on the grass still smoking. We tossed a few at each other and quickly learnt what a terrible effect the gas had. We then tried to wash away the traces in the Paekakariki water supply only to see it had produced a supply of muddy water which would eventually reach the village.

One day we were at the beach, I looked over the bank and half a dozen Americans appeared. They headed out to sea near the Waikakariki Stream, using their 50cal machine guns to sink steel drums.

One afternoon after foraging in the Camp Russell rubbish dump we were walking home and could see a machine gun site with some Marines standing around it to the north of the camp. We heard it begin to fire, and turning to watch were horrified to see bullets hitting the grass about 100 yards behind us. We headed east for the safety of the railway line as fast as we could.

One day we were sitting on a small hill watching a truck being unloaded in Queen Elizabeth Park. Armed guards stood by as Marines on punishment threw out cartons of butter and sides of lamb. Given we were all rationed at the time, it seemed an awful waste. We were always on the look for their ration packs, especially the ones containing high-energy chocolate and coffee, which were highly sought after.

Although forbidden to, a friend and I got a job as Evening Post paper boys at the railway station. One of us worked the station and the other the train. Marines seldom worried about change so it was a great paying job. Navigating the train could be difficult. The Marines would stretch their long legs across the aisle, and if you weren't careful by the time you left the train it would be gathering speed with the next stop at Levin!

When the Marines left at the end of October 1943, the locals who lived to the north of the Village scored a great collection of goods and material. Within a day or so the New Zealand troops training at Trentham moved into the campsites and armed guards patrolled the boundaries.

North down the stream and into the valley where the Marines Prison was thought to have been, the Guardians of Whareroa Farm have planted a large number of trees.

We visited the homestead on a number of occasions and even with our young eyes, could see the lack of maintenance was taking its toll. We were actually there to check out the orchard, but the apples did not compare with those we'd received at school. During this visit, we looked at the covered reservoir for a swim, but considered it too dangerous. We later discovered concrete training bunkers built for the Marines at the eastern end of the camp where the planting was first done.