David Mears was barely 12 months old when his mother and father befriended a young Marine on the beach at Paekakariki. Little did he know that this friendship would linger on in his heart and trigger a life-long interest in Marines' history.

Robert McElvane was one of about 15,000 Marines stationed in Paekakariki between 1942 and 1944. Like most of them he was young man – probably about 19 years old. He was fresh out of money and asked David's parents if they would lend him 10 shillings for a train fare into town.

Harry and Connie Mears agreed and Robert conscientiously took down their name and address, vowing he'd get the money back to them quickly.

Promises are promises, but David says his parents were pretty surprised when Robert knocked on the door of their Johnsonville home two weeks later to return the money. He came inside and played with the young baby David, nick-naming him Buzz – a name which was to stick for life.

Harry Mears was a plumber who had been "manpowered" to work in the Marines camps in Kapiti and Johnsonville. He and Connie took a keen interest in young Robert, inviting him to their home frequently.

When he was sent off to fight in the Pacific Connie wrote to him and baked him cakes, packaging them up in a tin, which David soldered down to keep the tin airtight. Soon the letters started coming back, and the family realised with great sadness that Robert had been killed. Connie wrote to his mother in the U.S. but there was no reply and the lines of communications were severed.

"In some ways I feel I owe my life to him. The Marines really did come to fight for our freedom," he says. 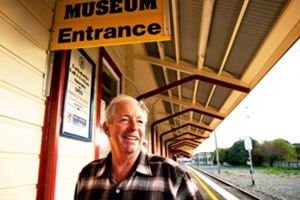 Some years later, when David was working with his Father on a job in Khandallah, he spotted a large sign in the customer's garage. His father recognised it as the original sign for the entrance to Camp Mackay and believed it could have been in the garage since the end of World War11 when the house was occupied by the then Minister of Works.

One thing led to another and the customer gifted him the sign, which he hung on to with pride for over 40 years.

"I got an address for a Museum I could send it to in American and thought of flying across there and giving it to them in return for a ride down Route 66 in a Mustang Convertible. "But someone reminded me we would lose it for good," he says.

About 20 years, as part of celebrations for the 50 year anniversary of the Marines "friendly occupation" of New Zealand, David mounted the sign on cab of a 1939 barrel-nose Ford truck and along with members of the Early American Car Club, led the parade through the streets of Wellington.

Last year, David saw an advertisement for a history gathering session organised by the Kapiti U.S. Marines in Paekakariki. It was then that he realised there was a much better resting place for the sign. 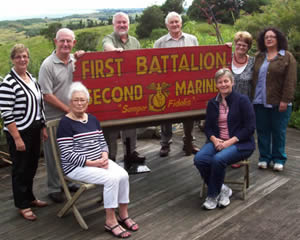 David and Robyn Mears have gifted the sign to the Paekakariki Station Museum and it is now centre stage in the current exhibition on the Marines, showing in the Museum.