Paekakariki resident, Lesley Varcoe was eight years old when she woke up to see very large grey warships in the sea in front of her family home on The Parade.

"I didn't know where they had come from or what they were here for, they weren't moving, they were just still. It was a bit frightening," she recalls

"The presence of the grey ships was a signal that something was really happening in the village. It was the first time I remember being aware that the Marines were in Paekakariki," she says.

Lesley's father, Ivan Andersen, was a carpenter, and was in the Home Guard. He was "man-powered" to work for a Miramar construction company supplying pre-fabricated houses for the camps, which were built in six weeks.

"There were concrete floors to be laid for cook houses, ablution blocks, wooden huts, wooden floors, and big tents with wooden floors – to accommodate thousands of men." 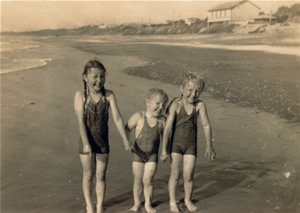 Lesley remembers welcoming the Marines to the village: "we lined-up along the school fence and waved as they marched up the main road. There were lines and lines of men in army uniform, similar to my uncle's – they were coming past me up the road as far as I could see.

"I can remember them driving along the Parade in their jeeps, past our home – it was something new as the road was always so quiet. Being next to the sea we had to have total blackouts on our front windows because any smidgen of light escaping could be visible from the sea. Sometimes a stone would land on the roof – a signal from patrols that light was showing and had to be corrected."

"In the darkness from the corner of my bedroom, I would watch night after night - showers of red tracer bullets that the Marines were shooting out to sea. Occasionally there were big booms that shook our house and rattled our windows. We were terrified," she says.

Another highlight was watching the Marines practice their amphibian exercises and landings. "Barge-like craft, came in close to the beach on the waves, dropped their fronts and Marines in full battle gear, leap out and ran up the beach to the bank. There were also large grey rubber boats, like big IRB's, that they used to drive further up the beach."

Then, Lesley recalls an auspicious day when the children were forbidden to go to the beach after an amphibian craft had been swamped at sea. "The men on board were in full battle gear and they stood no chance of survival in the deeper water. We were off the beach until they were all accounted for."

"One day the ships were gone. They seemed to have been there for a while. Perhaps those exercises had finished," she says.